I have little recall of the exact moment it happened, but I grew up being enamored by Zenzile Miriam Makeba. At the curious age of seven, I would often find myself rewatching the acclaimed 1992 musical, Sarafina, where she had a supporting role. My favorite scene in the movie, where she sings a duet titled, Thank You Mama, with her on-screen daughter portrayed by Leleti Khumalo, would always pull me back in. Little did I know of her brilliance outside of being an actress.

Because of the movie, I was privy to the fact that she could effortlessly carry a note. But I was not aware of her icon status, which she had rightfully earned after decades of showcasing her culture and advocating for the liberation of Black South Africans through her music.

Years later, Mama Makeba managed yet again to find her way into my mind and heart through a Warsan Shire poem titled Questions For Miriam. At first, it had not quite registered to me that Shire wrote about thee Mama Africa. But when I finally did, the poem took on a completely different meaning.

Did they know that you were only human?

My parents played your music at their wedding.

As a teenager, the following lines prompted me to rethink how I thought of her. Was I placing too much emphasis on her art and social justice work? Was I idolizing her? Was I unconsciously projecting the strong Black woman trope onto her? Was I robbing her off of her humanity by reducing her to her life’s work?

These are all questions I continuously asked myself. And I found myself with a deep yearning to know Makeba’s life story in its entirety, not just the mainstream narrative that was readily available online. I had an unshakeable desire to learn about the woman behind the music, the life she led before the exile, who she loved, what brought her joy, among other things.

This summer, I promised myself that I would purchase her autobiography, Makeba: The Miriam Makeba Story. And during the fall, it came to be! As I read the book, I was overwhelmed by a myriad of emotions. For starters, I deeply sympathized with her, for she was no stranger to loss and grief. Or, as Warsan Shire penned down in a poem titled Ugly, ‘she knows loss intimately.’

She survived infancy incarceration, an abusive relationship, an ectopic pregnancy, cervical cancer, a hysterectomy, and the death of two of her grandchildren and her only child, Bongi. Her former husband, Stokely Carmichael, wrote the following about her in his biography, Ready for Revolution;

Looking at the youthful, serene, seemingly untroubled beauty of this woman’s face, one could never imagine all that she had endured and survived. First, the daily humiliation, grinding poverty, and brutality of apartheid in South Africa, whereas a young child, she accompanied her mother into jail for a year. Her mother’s crime? Brewing and selling ‘native’ beer to support her children after her husband’s untimely death. She had survived the murder of her family members by police: two of her uncles were murdered at the Sharpville Massacre. She had endured the pain of exile and the harassment of the illegal government and had also survived a serious onslaught of cancer in the United States. Looking at her calm confidence, though, one would never guess all that this African woman’s life had been. She was a survivor. And a beautiful spirit.

Reading her autobiography in my twenties has been humbling. Not only did I get acquainted with the Zenzile Miriam Makeba, who existed beyond her art, but along the way, I have acquired invaluable life lessons from a woman who dared to live a full life.

Here is what Zenzile Miriam Makeba taught me:

TO DARE TO ASK THE DIFFICULT QUESTIONS

In her teenage years, Zenzile stopped going to church altogether. What began as a moment of introspection led to an epiphany.

She could never make sense of why her Gogo (grandmother) would give her money for the offertory, only to come back home to no food. Or why when the chickens laid eggs, they took them to the priest for his keeping.

It was no secret that her family was struggling to get by. So, why were they repeatedly giving away what they barely had? And by the looks of things, the priest was far from being impoverished. He was well off enough to own a car, which his children used to commute to school and church. Yet everyone else had to make their way by foot, come rain or shine!

And it is then she asked herself, ‘Why am I going to church?’

CREATIVITY SHOULD FOSTER CAMARADERIE; NOT COMPETITION

Working in the same competitive industry, one would have expected Miriam Makeba and Dorothy Masuka, a Zimbabwean-born, South African bred jazz songstress, to be rivals.

However, it was quite the contrary! The two quickly became friends. They collaborated, learned from each other, broke bread together, and confided in each other. Both of them dreamt of a day where they could freely sing about the woes that plagued Black South Africans during the apartheid era.

Their friendship was proof of sisterhood’s power, the joy of being in community with a like-hearted individual. Also, it was proof that there is more than enough room for one brilliant woman to thrive and flourish in her creative industry of choice.

TO SHOW UP IN SOLIDARITY

Makeba was often invited by political leaders, hailing from both the continent and the diaspora, to sing to the masses at their events, celebrating their independence.

Three years later, President Forbes Burnham extended an invite to her for Guyana’s independence celebration. Much like she had done in Kenya, Burnham asked her to help with his campaign, to which she agreed.

Her most notable appearance was at the Mozambique independence celebration on June 25th, 1974, where she sang, Aluta Continua, Portuguese for the struggle continues. In the song written by Bill Salter and her daughter, Bongi, Zenzile reminds the people in Namibia, Botswana, Zambia, Angola, and her motherland, South Africa, that the struggle for freedom continues.

DO NOT HESITATE TO TURN TO OTHERS IN TIME OF NEED

When her American visa processing took longer than expected, Makeba took it upon herself to turn to Harry Belafonte for help. Fortunately for her, Belafonte’s influence worked in her favor. And as a result, she was able to travel to the United States of America to make an appearance on the Steve Allen Show on November 30th, 1959.

Nevertheless, it wouldn’t be the last time where she would find herself in dire need of a helping hand.

After being promised a fee of 45 000 US dollars, Makeba agreed to perform in Lesotho, Swaziland, and Botswana at a show organized by a group of South African businessmen, including her former husband, Hugh Masekela, and a promoter that went by the name Godfrey Moloi.

However, due to a cholera outbreak in South Africa, Swaziland and Botswana placed a travel ban on South Africans. And as a result, Makeba ended up performing only in Lesotho to an audience of over 40 000 people. All was going well until she could not get a hold of anyone from the organizing team since she had yet to get paid.

Without her payment, she had no means of purchasing a return ticket to Guinea for herself and her two musicians. It is then that she turned to Graca Machel, Mozambique’s First Lady, who was able to book her performances, and through them, Makeba earned enough money to fund her travel expenses.

Renowned for singing in her native language, Xhosa, her audience in the United States of America would be thrilled whenever she sang Qongqothwane and Baxabene Oxamu. The so-called click sounds were fascinating to many. But since her non-Xhosa-speaking fans struggled to pronounce the songs’ actual names, their unofficial names became the ‘Click Song’ and ‘The Click Song No 2’.

Consequently, and much to Zenzile’s displeasure, a journalist, saw it as an opportunity to dub her as the ‘click-click girl.’ Here is what she had to say about it,

‘I didn’t like that at all; it made me feel like those songs were the only songs I had ever done and the only songs that people would remember me by!’

Whether or not said journalist meant any harm by it, Makeba could not stand the thought of being reduced to either song; and to that one detail. She demonstrated that when people come to us with their flimsy, reductive, one-dimensional labels, we have every right to refuse them for ourselves. Because we know better and demand better, not just anything will do. Besides, why go along with being called a puddle when we are of the ocean.

Mind you, Makeba sang in several languages, including French, Swahili, Arabic, and Amharic. So, there was a lot more to her discography than the songs mentioned above.

THERE IS LOVE IN LEAVING & LETTING GO

In her lifetime, she married a total of three times. And some may take it as an indication that she was terrible at love, but not to me. I wholeheartedly believe that there is love in leaving and letting go.

Sometimes lovers are pulled in different directions. Like Miriam and her first husband, Sonny Pilay, who she fondly referred to as Shunna. Their marriage came to an end shortly after she left South Africa for the United States. Meanwhile, Shunna resided in the United Kingdom. Hence why creating a life together proved difficult.

Other times, it is a mere mistake. As was her marriage to her long-time friend, Hugh Masekela, who she fell in love with and later wed in April 1964. However, it did not take long for them to call it quits. Their 2-year union succumbed to the pressures of navigating through life while in exile.

And on other occasions, lovers drift apart without warning and after years of being together. What starts as a gradual diverging of paths becomes the end of an era, as was the case in her 10-year marriage to the civil rights activist, Stokely Carmichael.

So, where does the love in leaving and letting go come in?

It comes in knowing when to give it a fair shot and recognizing when it has come to the end of the road. There is reverence in gracefully bowing out a commitment for the greater good of everyone involved.

At times, people are better off apart and sending love to each other from a distance. At times, the love is there, but the desire to be in a union fizzles out, which goes without saying; to love, one doesn’t have to be in partnership.

Although her marriages’ demise saddened her, she never found a point to cling tightly to what once was. Or, as she articulated,

‘I never could fight. I had to learn that in this life, if you love someone,

you try to make a life together and when it ends, it ends. That was life.’

And for that reason, I am inclined to believe that she was a true testament to this. 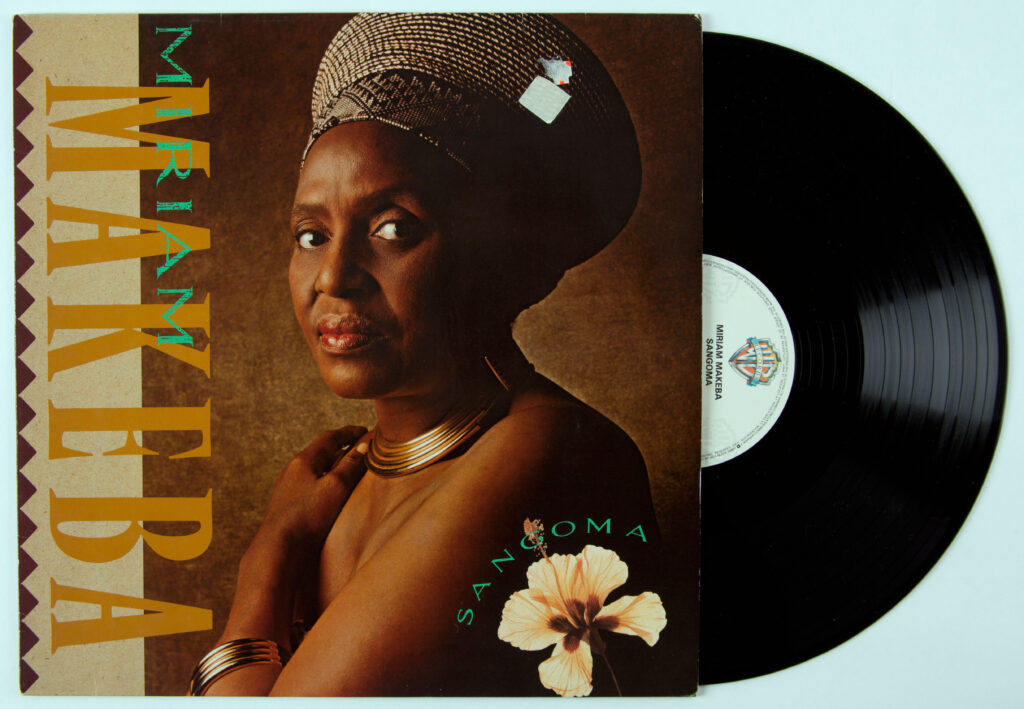